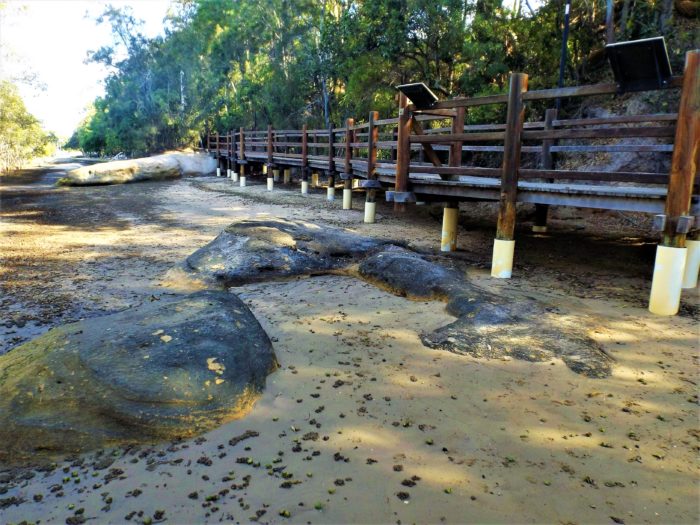 Tucked away among the mangroves at Deception Bay are heritage-listed swimming pools that are filled and drained by nature. The Deception Bay Sea Baths, located at Captain Cook Parade in Deception Bay, are the only surviving 19th-century baths in Queensland.

The Deception Bay Sea Baths, also known as Bancroft Sea Baths, consist of two baths that were carved out of a sandstone outcrop on Deception Bay foreshore. These rectangular excavations, named the Fisheries Bath and the Boardwalk Bath, were built by Joseph Bancroft sometime in the late 19th century.

The Fisheries bath is located about 20 metres east of the Department of Primary Industries Southern Fisheries and measures 4.3 by 2.7 metres. The Fisheries Bath was used for recreation purposes by the Bancroft family.

The Boardwalk Bath, the smaller of the two baths, is about 3 metres long and 1.8 metres wide. It was used by Mrs Ann Bancroft, who was suffering from chronic ailments, for therapeutic purposes. During that era, fields of research and experimentation about the therapeutic benefits of the seaside have emerged and sea bathing was being promoted for its health benefits.

The Deception Bay Sea Baths was listed on the Queensland Heritage Register in July 2006. The baths were cited for being uncommon surviving examples of 19th-century baths and likely to be “the only extant example of their type in Queensland.”

The baths also demonstrate the evolution of Queensland history as they are the physical evidence of the use of the seaside in recreational and therapeutic purposes at that time.

The Deception Sea Baths have a special association with Dr Joseph Bancroft and son Thomas, who made significant contributions to medical research during the late 19th Century and early 20th Century, specifically in the field of parasitology.

Today, The Deception Bay Sea Baths is an idyllic setting for families to enjoy the outdoors and a respite from the stresses of daily life.