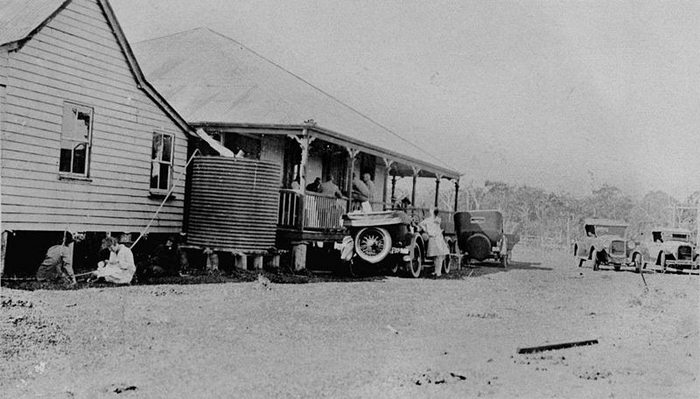 Deception Bay has several historic sites that tell the story of how the region developed over time. The Deception Bay Heritage Trail highlights these sites and narrates the evolution of the area from being the home of indigenous Australians to becoming a progressive region.

Exploring the Deception Bay Heritage Trail is a great way to learn more about the region. The 4-km heritage trail can be completed in a 90-minute stroll.

The heritage trail, consisting of 13 sites, starts at the northern end of Beach Road and ends at the southern end of Deception Bay’s Esplanade. The trail is highly accessible since it’s wheelchair- bike-, scooter-, and stroller-friendly.

The Pictures in the Rocks and the Bancroft Baths

The first stop presents sandstone rocks with beautiful patterns. The heritage-listed baths, cut out of sandstone rocks, have a strong connection to the Bancroft family as well as their contributions to science. Joseph Bancroft was responsible for creating the baths that offer the health benefits of sea bathing.

Read: Discover the Hidden Gem That Is the Deception Bay Sea Baths

Dr Joseph Bancroft had many contributions in zoology, botany, and medicine. He discovered that the Wuchereria bancrofti parasitic worm causes elephantiasis. He is also the first in Australia to describe lockjaw (tetanus) and tick paralysis.

Flinders was able to sail through Deception Bay in 1799 although it wasn’t mentioned in his log.

By 1823, John Oxley did mention Deception Bay in his log during his travels whilst searching for a remote site for convict settlement.

At the time of European settlement, beekeeping, fishing, and tree-felling were introduced in the region. Some areas of land were also cleared for the dairy and beef cattle industry.

Just like his father, Dr Thomas Bancroft earned a reputation for being an active scientist, botanist, doctor, and photographer. He expanded his father’s work about tropical diseases. He also provided evidence that Aedes aegypti mosquitoes cause dengue fever.

During the Second World War, Deception Bay became an army camp for around 3,000 soldiers. These include Australians recalled back from overseas after the Japanese entered the war in 1942.

The Gubbi Gubbi people were the first inhabitants of the foreshore of the region. They lived off the natural bounty of the land and the ocean.

In 1897, however, most of the Gubbi Gubbi and other indigenous people of Queensland were forcibly removed from the area.

In 1905, William Wallin established a kiosk near the popular campground. His son, Oliver took over the kiosk and re-established the post office around 1928-1929. The kiosk has been an important landmark in the area.

Viola and George Turnbull continued to run the kiosk until its closing on October 2004, nearly a century after its establishment.

The 10th site in the heritage trail honours the early settlers that helped in shaping Deception Bay area to become what it is today.

Alexander Brand Webster is a businessman who had an interest in the Brisbane Tug & Steamship Company. He called his holiday house ‘Boondar’ which he believes is an indigenous name meaning kangaroo.

Although his home in the area is just a holiday house, Webster is active in the Deception Bay community. He was the one responsible for establishing the first live saving patrols at the Bay in 1924. He also built a bowling green and tennis court in the area in 1929 for public use.

A Place of Plentiful Food

Indigenous people living in the area relied upon the abundance of food at the Bay. Collecting food is important for their community. Because of this, most of them spend much time mending nets, sharpening spears, and going out for fishing parties at night.

Today, Deception Bay is made up of diverse communities from the Pacific Islanders and Indigenous Australians to people from different nationalities including those from the British Isles, Europe, New Zealand, and Asia.

Heritage trails are valuable assets for Moreton Bay region. These sites help locals and visitors understand the culture and past influences of the area.